Why the 9/11 Conspiracy Theories Won't Go Away 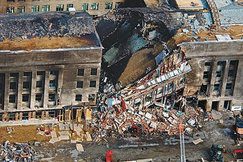 Take a look, if you can stand it, at video footage of the World Trade Center collapsing. Your eye will naturally jump to the top of the screen, where huge fountains of dark debris erupt out of the falling towers. But fight your natural instincts. Look farther down, at the stories that haven't collapsed yet.

In almost every clip you'll see little puffs of dust spurting out from the sides of the towers. There are two competing explanations for these puffs of dust: 1) the force of the collapsing upper floors raised the air pressure in the lower ones so dramatically that it actually blew out the windows. And 2) the towers did not collapse from the impact of two Boeing 767s and the ensuing fires. They were destroyed in a planned, controlled demolition. The dust puffs you see on film are the detonations of explosives planted there before the attacks.

People who believe the second explanation live in a very different world from those who believe the first. In world No. 2, al-Qaeda is not responsible for the destruction of the World Trade Center. The U.S. government is. The Pentagon was not hit by a commercial jet; it was hit by a cruise missile. United Flight 93 did not crash after its occupants rushed the cockpit; it was deliberately taken down by a U.S. Air Force fighter. The entire catastrophe was planned and executed by federal officials in order to provide the U.S. with a pretext for going to war in the Middle East and, by extension, as a means of consolidating and extending the power of the Bush Administration.

The population of world No. 2 is larger than you might think. A Scripps-Howard poll of 1,010 adults last month found that 36% of Americans consider it "very likely" or "somewhat likely" that government officials either allowed the attacks to be carried out or carried out the attacks themselves. Thirty-six percent adds up to a lot of people. This is not a fringe phenomenon. It is a mainstream political reality.

Although the 9/11 Truth Movement, as many conspiracy believers refer to their passion, has been largely ignored by the mainstream media, it is flourishing on the Internet. One of the most popular conspiracy videos online is Loose Change, a 90-min. blizzard of statistics, photographs, documents, eyewitness accounts and expert testimony set to a trippy hip-hop backbeat. It's designed to pick apart, point by point, the conventional narrative of what happened on Sept. 11, 2001.

For all its amateur production values--it was created by a pair of industrious twentysomethings using a laptop, pizza money and footage scavenged from the Internet--Loose Change is a compelling experience. Take the section about the attack on the Pentagon. As the film points out--and this is a tent-pole issue among 9/11 conspiracists--the crash site doesn't look right. There's not enough damage. The hole smashed in the Pentagon's outer wall was 75 ft. wide, but a Boeing 757 has a 124-ft. wingspan. Why wasn't the hole wider? Why does it look so neat?

Experts will tell you that the hole was punched by the plane's fuselage, not its wings, which sheared off on impact. But then what happened to the wings? And the tail and the engines? Images of the crash site show hardly any of the wreckage you would expect from a building that's been rammed by a commercial jet. The lawn, where the plane supposedly dragged a wing on approach, is practically pristine. The plane supposedly clipped five lampposts on its way in, but the lampposts in question show surprisingly little damage. And could Hani Hanjour, the man supposedly at the controls, have executed the maneuvers that the plane performed? He failed a flight test just weeks before the attack. And Pentagon employees reported smelling cordite after the hit, the kind of high explosive a cruise missile carries.

There's something empowering about just exploring such questions. Loose Change appeals to the viewer's common sense: it tells you to forget the official explanations and the expert testimony, and trust your eyes and your brain instead. It implies that the world can be grasped by laymen without any help or interference from the talking heads. Watching Loose Change, you feel as if you are participating in the great American tradition of self-reliance and nonconformist, antiauthoritarian dissent. You're fighting the power. You're thinking different. (Conspiracists call people who follow the government line "sheeple.") "The goal of the movie was just really to get out there and show that there are alternate stories to what the mainstream media and the government will tell you," says Korey Rowe, 23, who produced the movie. "That 19 hijackers are going to completely bypass security and crash four commercial airliners in a span of two hours, with no interruption from the military forces, in the most guarded airspace in the United States and the world? That to me is a conspiracy theory."

It's also not much of a story line. As a narrative, the official story that the government--echoed by the media--is trying to sell shows an almost embarrassing lack of novelistic flair, whereas the story the conspiracy theorists tell about what happened on Sept. 11 is positively Dan Brownesque in its rich, exciting complexity. Rowe and his collaborator, Dylan Avery, 22, actually started writing Loose Change as a fictional screenplay--"loosely based around us discovering that 9/11 was an inside job," Rowe says--before they became convinced that the evidence of conspiracy was overwhelming. The Administration is certainly playing its part in the drama with admirable zeal. If we went to war to root out fictional weapons of mass destruction, is staging a fictional terrorist attack such a stretch?

But there's a big problem with Loose Change and with most other conspiracy theories. The more you think about them, the more you realize how much they depend on circumstantial evidence, facts without analysis or documentation, quotes taken out of context and the scattered testimony of traumatized eyewitnesses. (For what it's worth, the National Institute of Standards and Technology has published a fact sheet responding to some of the conspiracy theorists' ideas on its website, www.nist.gov. The theories prompt small, reasonable questions that demand answers that are just too large and unreasonable to swallow. Granted, the Pentagon crash site looks odd in photographs. But if the Pentagon was hit by a cruise missile, then what happened to American Airlines Flight 77? Where did all the real, documented people on it go? Assassinated? Relocated? What about eyewitnesses who saw a plane, not a missile? And what are the chances that an operation of such size--it would surely have involved hundreds of military and civilian personnel--could be carried out without a single leak? Without leaving behind a single piece of evidence hard enough to stand up to scrutiny in a court? People, the feds just aren't that slick. Nobody is.

There are psychological explanations for why conspiracy theories are so seductive. Academics who study them argue that they meet a basic human need: to have the magnitude of any given effect be balanced by the magnitude of the cause behind it. A world in which tiny causes can have huge consequences feels scary and unreliable. Therefore a grand disaster like Sept. 11 needs a grand conspiracy behind it. "We tend to associate major events--a President or princess dying--with major causes," says Patrick Leman, a lecturer in psychology at Royal Holloway University of London, who has conducted studies on conspiracy belief. "If we think big events like a President being assassinated can happen at the hands of a minor individual, that points to the unpredictability and randomness of life and unsettles us." In that sense, the idea that there is a malevolent controlling force orchestrating global events is, in a perverse way, comforting.

You would have thought the age of conspiracy theories might have declined with the rise of digital media. The assassination of President John F. Kennedy was a private, intimate affair compared with the attack on the World Trade Center, which was witnessed by millions of bystanders and television viewers and documented by hundreds of Zapruders. You would think there was enough footage and enough forensics to get us past the grassy knoll and the magic bullet, to create a consensus reality, a single version of the truth, a single world we can all live in together.

But there is no event so plain and clear that a determined human being can't find ambiguity in it. And as divisive as they are, conspiracy theories are part of the process by which Americans deal with traumatic public events like Sept. 11. Conspiracy theories form around them like scar tissue. In a curious way, they're an American form of national mourning. They'll be with us as long as we fear lone gunmen, and feel the pain of losses like the one we suffered on Sept. 11, and as long as the past, even the immediate past, is ultimately unknowable. That is to say, forever.