The Protocols of the Elders of Zion, Aum, and Antisemitism in Japan 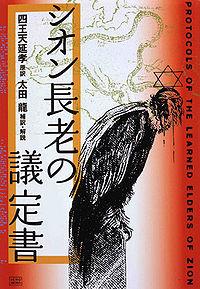 Beginning in the mid-1980s, dozens of books based on the Protocols of the Elders of Zion began to appear in Japanese bookstores and sold millions of copies. Jews were described in these books and in the large, gaudy advertisements that appeared for them in mass circulation daily newspapers as a clandestine cabal plotting to destroy Japan and rule the world. The Jewish plot, the books charged, had already succeeded. The United States, Japan’s chief ally and most important trading partner, was controlled by Jews, who formed a “shadow government” and manipulated U.S. policies for their own perfidious ends. Certain ministries within the Japanese government had already been taken over by Jews, it was said, and Japan was doomed unless something could be done. The enemy was ruthless, and the response, it was implied, had to be equally so.

Source : David G. Goodman, “The Protocols of the Elders of Zion, Aum, and Antisemitism in Japan”, Posen Papers in Contemporary Antisemitism #2, (Jerusalem: Vidal Sassoon International Center for the Study of Antisemitism, 2005).