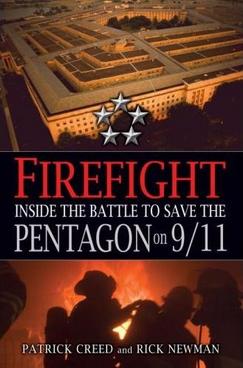 [Special Agent] McKenzie gathered a dozen photographers on the lawn for a briefing. "We don't need to photograph all the plane parts," he told them, "only unique airplane parts or something specific. Like the pilot's yoke, or anything with part of a serial number on it. If we have to prove what king of plane this was, the serial numbers will be what we need" One of the debris pieces McKenzie photographed himself was a piece of aluminum with the American Airlines twin-A logo on it." (p. 182)

Special Agent Tara Bloesch was assigned to set up the morgue. She had all the right experience- before joining the FBI, she'd worked as a forensic investigator near Philadelphia and as a parole officer in the city itself. With the FBI, Bloesch had helped run morgue operations in Kosovo and Serbia, documenting war crimes and mass graves, after NATO troops intervened in the war there in 1999. Her colleagues knew her as an articulate, tough Philly girl who didn't blanch at difficult jobs. She would keep the morgue under tight control.
O'Connor needed other people to work with her. He gathered several dozen agents on the lawn, near the helipad, to sort out who would deal with remains, evidence, and other aspects of the huge job. "Obviously we'll be doing a lot of human remains and body recovery," he announced to the crowd. "If you're comfortable doing that step over here. If you're not, that's okay, because I need people doing other things too." More than half the group moved to the spot he had indicated. Then he added, "This is not a normal event. If anybody needs to talk to someone, nobody's going to think any less of you." (p. 267)

For the first time, Regan's team saw something they had expected to see all along but had been scarce until then: recognizable airplane parts. They all thought they would find big pieces of the airliner laying everywhere, the way car parts end up strewn across a highway after a crash. But the physics of an airplane crash were obviously different: Mostly there was just tons of shredded metal and melted plastic.
Finally, they found several airplane seats, piled among the usual mounds of upturned office furniture and random wreckage. A couple of the seats still had bodies belted into them, which had already been found and marked for the FBI. Most of the workers inside were conscientious about not gawking, yet the seats attracted a lot of attention. They were the first objects the nonaviation experts had seen that unmistakably belonged to an airplane. (p. 373)

Whitworth had positioned himself at the edge of the punch-out hole to eyeball everything searchers were hauling out. Hill walked by with square object, blackened with soot, headed for the bin, when he stopped her. "Hey, gimmee that," he said, pulling the burnt object out of her hands.
The device was roughly the size of a shoe box, melted on one end. It was ashen-colored and looked nothing like the pictures of the black boxes- which were orange- but Whitworth could tell that it wasn't part of the building. "We need to let the NTSB look at this," he declared.
Whitworth found one of the NTSB analysts. "Oh fuck," she groaned when she looked at the mangled device. She identified it as the airplane's cockpit voice recorder, which captured sounds in the cockpit. It looked to be nearly demolished- there was a marginal chance they'd be able to get any information from it.
Still it was a breakthrough. Whitworth returned to the punch-out hole a moment later, empty-handed. "Hey, that was a great find," he told Hill. "That was one of the black boxes. Where'd you find it?"
"Right over here," she said, pointing to a stack of jumbled rubble. Searchers formed a circle around the pile and started digging, since the black boxes on 757s were both in the same section of the airplane.
About half an hour later another NTSB expert uncovered a device that looked like it could be the other black box. It turned out to be the flight data recorder, which collected electronic information about the operation of the jet. Both of the black boxes had finally been found, pulled like two broken shells from an ocean of debris. (p. 401)

The airplane had nearly disintegrated, but Dan Fitch's group found several huge cogs, bent and blackened, that weighed a couple hundred pounds each; it took a couple of workers to handle each one. Other objects nearby looked like large gears, and strips of metal that appeared to be fan blades. Workers realized that they were pulling apart the remnants of one of the aircraft's two engines. The aluminum cowling that had encased it all had been torn away, but the guts of the engine were there.
FEMA crews used a blowtorch to free the core of the motor from the column in which it was embedded. Then Fitch and several
others used pieces of six-by-six to pry the motor loose from the column and push it off the pile. With the help of some Old Guard troops, they rolled the heavy piece of machinery onto a dolly and finally managed to push it outside. The whole effort took the better part of an entire shift. (p. 425)