At the request of many cartoonists and in view of the current global health crisis, the organisers of the Contest have decided to extend the deadline for sending in editorial cartoons beyond March 31, 2020. The new closing date for entries is thus extended by one month to April 30, 2020. We would like to remind you that the aim of the Contest is to fight conspiracy theories, rumours and conspiracy disinformation. 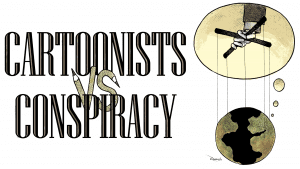 The rise of conspiracy theories in recent years, the proliferation of false news on the Internet and the worrying emergence of a “post-truth” era where the facts seem to count less and less in the public debate, are of concern to all those who wish to defend democratic values ​​and counter negationist discourses.

To help combat conspiracism, the Memorial of Caen and Conspiracy Watch – the Observatory of Conspiracism, in partnership with L’Histoire magazine, are organizing an International Press Cartoon Contest against negationism and conspiracism, “Cartoonists Vs. Conspiracy”.

In accordance with the contest rules, the cartoons presented may have the following theme:

The twelve members of the selection jury, composed of press cartoonists, representatives of the partner institutions and journalists, will jointly nominate the winners of the contest according to the following criteria: relevance and eloquence of the cartoon in relation to the theme of the contest, choice of the subject, relevance of composition, quality of production.

The jury members are:

Press cartoonists from all over the world are invited to participate in this contest in a spirit of commitment to democratic values. However, those who have participated or contributed to events whose goals and objectives are unethical, who are resolutely against to racism, anti-Semitism and all forms of negationism, will be excluded.

The award ceremony will take place in Paris between May and November 2020.

Each cartoonist will send at least one and at most three published or not-published but not awarded cartoons.

Each cartoonist will send a short biography (about 300 signs in French or English) and a photo (portrait format) along with his cartoons.